Go to any sales training (I've been through a ton of them) and you will be inundated with the same old stuff.

A lot of that stuff worked well in the 70s, 80s, and even the 90s, but today's audiences are more sophisticated, more cynical and less trusting today than ever before.

So how do we get through to people whose shields are always "up"?

END_OF_DOCUMENT_TOKEN_TO_BE_REPLACED

In business, there is one "superhero power" that rules them all.

The fact is, you could have the best product in the world, but if you don't know how to market it, no one will buy it.

The flip side is that you could have the most worthless product in the world (think of the "Pet Rock" from the 80s) and millions would buy it if the marketing is right.

The science of "copywriting" is the art of using persuasive language to get people to say "YES!" to your product or service...

END_OF_DOCUMENT_TOKEN_TO_BE_REPLACED

New NLP Book from Michael Stevenson: The Power to Create Your Day Now! 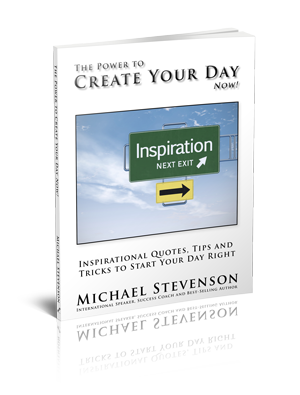 I'm happy to announce my new book, The Power to Create Your Day Now!

As we know, the problem with most personal development is that it tends to wear off.

Life kicks in, old anchors and habits return and motivation slowly trickles away.

This is due to a principle called LODI: the Law of Diminishing Intent

It says that your motivation to do anything diminishes proportionately to the amount of time that passes.

How do you defeat LODI?

END_OF_DOCUMENT_TOKEN_TO_BE_REPLACED

Over 40 years ago, the founders of NLP discovered that all of our experience of “reality” is dictated by the pictures, sounds and feelings that run like movies in our mind. Not so much what they are, but how they're stored.

If you take a distressing thought (for example standing on the edge of a cliff representing a fear of heights), just thinking of that thought can cause fear. But it's not the thought itself that generates the fear, it's how it is stored that triggers that feeling.

For instance, take the image of something that scares you in your mind and push it far away from you, so it becomes small. Drain some of the light and color from it. Put a frame around it so it looks like a Polaroid. This will dramatically change the feeling.

END_OF_DOCUMENT_TOKEN_TO_BE_REPLACED

Seven Ways NLP Will Help You Live an Amazing Life

One of the biggest questions I get as a NLP Master Trainer and creator of the free NLP home study course is, "How can NLP help ME in my life?"

If you've been looking up NLP on the internet, your head is probably spinning from the ocean of wrong information out there.

Well, I'm here to clear it up for you.

Famed psychiatrist, Dr. Milton H. Erickson, the creator of Conversational Hypnosis, taught us that the subconscious mind is far more powerful than the conscious mind.

NLP (Neuro-Linguistic Programming), in short, is the programming language of the mind. It was discovered by studying the subconscious minds of people who have achieved success and created change in their lives.

END_OF_DOCUMENT_TOKEN_TO_BE_REPLACED

Creating lasting change in your life with NLP

Many people ask me how to create change that lasts.

As the new year approaches, people will begin making those New Years resolutions.

But how long do they last?

One of the things I teach students in my NLP courses is that there is one layer of the subconscious mind that is so powerful, that it trumps everything else...

END_OF_DOCUMENT_TOKEN_TO_BE_REPLACED

Persuasion NLP: Seven ways to Influence with Integrity Using the Most Powerful Mental Communication Tools on the Planet

Neuro-Linguistic Programming, or NLP, is the study of the science of the mind – both conscious and subconscious (or unconscious, as it is often referred to).

I remember when first started to learn NLP, one of the first things I discovered was that the unconscious mind does not process negatives. It literally doesn't understand concepts like no, don't, won't, shouldn't, can't, mustn't, stop. I took this knowledge home and began telling my kids what to do, instead of what not to do. People were always exclaiming how amazing my children were, and how great a dad I must be because they always listened!

And that's just one example! Using principles like this has allowed me to connect with, influence, lead and to help empower tens of thousands of people.

There are several components of NLP that allow you to become better at influence and persuasion...

END_OF_DOCUMENT_TOKEN_TO_BE_REPLACED

NLP Swish Pattern: A Powerful Technique With a Funny Name

There are an abundance of NLP techniques that have been created, but probably the best known is the one with the funny name. The Swish Technique.

The Swish Pattern is one of the more powerful of all NLP techniques. The reason for that is that the Swish pattern literally goes to the deepest levels of the subconscious mind to create change.

It helps you to repattern your thinking so that those "automatic thoughts" that used to drag you down, no longer do.

For instance let's say you want to use NLP for confidence (NLP is great for increasing confidence!). The Swish pattern, allows you to take a trigger for something that makes you lack confidence, and automatically convert it to confidence using the programming language of the mind.

END_OF_DOCUMENT_TOKEN_TO_BE_REPLACED

I have officially released my 10 hour Intro to NLP video course for free!

In this course, you can learn:

It costs nothing to enroll. Just sign up here for my online NLP course. It's free!